I’m standing on a hilltop in Yellowstone on a cold and bright December morning.    The snow beneath me is covered with hundreds of wolf tracks.    They must have been through here early this morning – the tracks are clearly fresh, and there are no other people tracks around.

I look over my shoulder.  It’s eerie.  Where are they now?    I’m not generally afraid of wolves, but when you see how big their tracks are…well, it’s eye-opening.

I notice a line of little coyote tracks in the midst of all of these giants.   How brave of him to be anywhere near this place!

The silence is broken by howling to the east of me, with answering howls from the hills across the river.  Not far!    I head back to the trailhead where Bill is waiting. The Wolf Project team has arrived.

It’s the Prospect Peak Pack, but they’re not sure about all the members, and they’re not sure why they’re this far east.    The wolves are not too close, but we can see them clearly with our binoculars, and get beautiful views of them through the great scopes that the wolf folks have.    I can even get some photos with my little camera.

We stayed until all was quiet and then went to explore elsewhere.  We returned late in the afternoon and once again followed the tracks to the hillside.   As we walked a lone coyote came out of the sagebrush just ten feet from us and walked down the trail ahead of us.   Was he the brave little guy whose tracks I’d seen that morning?  He sure wasn’t worried about us. 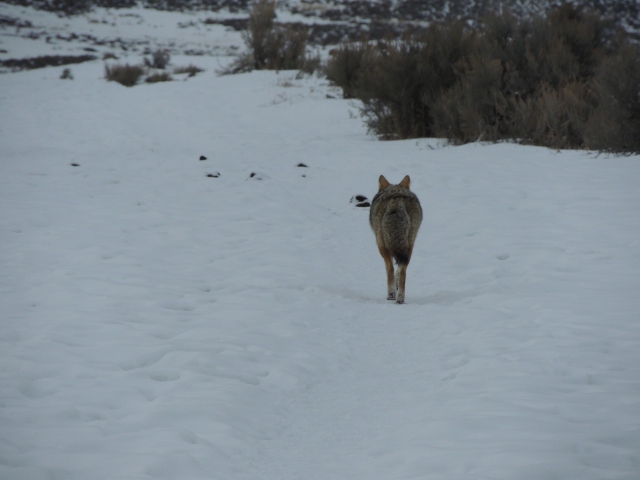 The coyote turned off the trail, and we thought he’d headed off, but as we got closer we saw that he was urgently digging in the snow.  There was something there for him to eat, and was not going to be distracted by a couple of weak looking humans.   He found it. 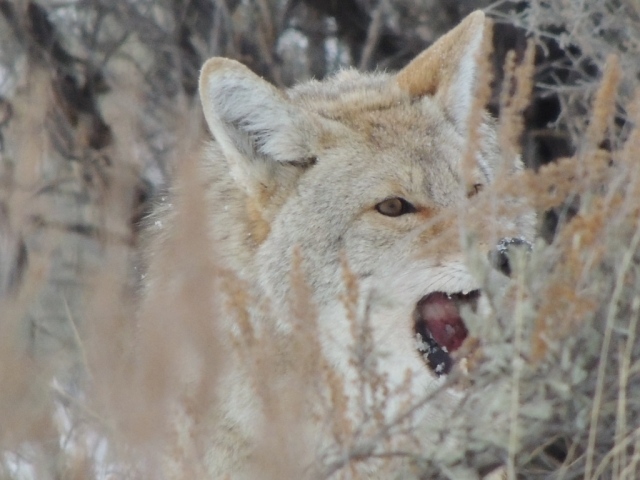 The wolves started howling as we watched.  I thought the coyote would finally give up, but no.  He paused, and looked our way, but he wasn’t giving up a dinner this good. 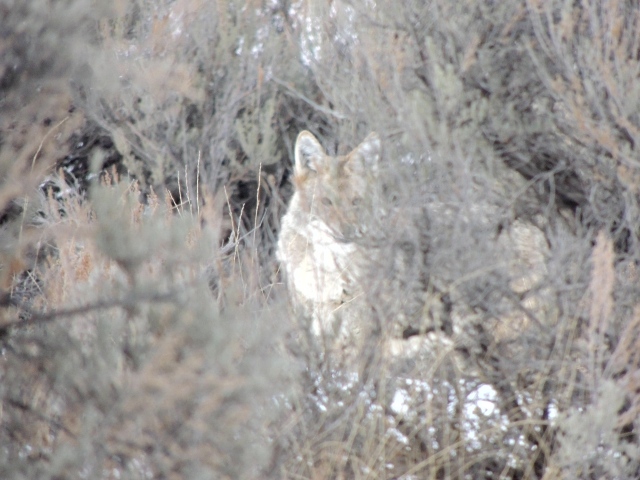 And the wolves?  They stayed hidden.   But hearing their howls at the end of the day was a perfect solstice gift.