Does This Bear Spray Make Me Look Fat? Accessorizing for Glacier.

I bought a new canister of bear spray this year, since my old one was one we’d found along the trail a few years ago, and I really wasn’t at all sure that it would really work when I needed it.  And I do believe that if you need your bear spray, you really need it to work.

So I went with this basic black model, which is quite chic and rather slimming, don’t you think?  I even gave it a test spray, and yep, it works.

Glacier National Park is one of the most beautiful places on earth, and it was particularly beautiful this past weekend, as you can see when I take myself out of the picture: 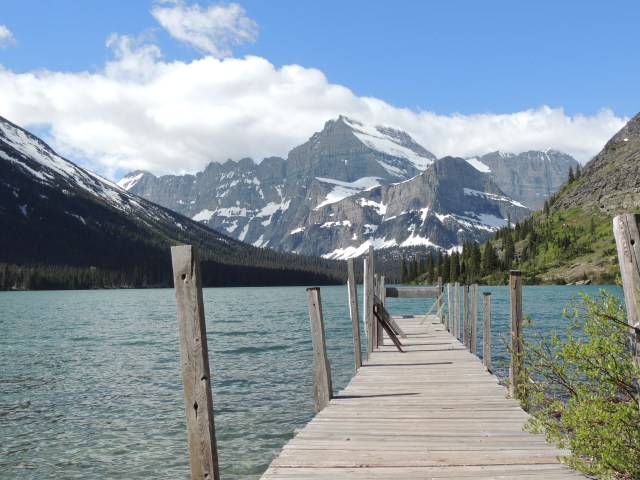 We arrived at Many Glacier Campground on a windy Friday afternoon.  The grand thing about camping in early June in Glacier is that the campground was delightfully uncrowded, and the hotels in Many Glacier weren’t yet open, so it’s a special time of year.  The sun was going down behind the mountains, and some weather was rolling in.

From our campsite we watched mountain goats and bighorn sheep on the hillside above us. 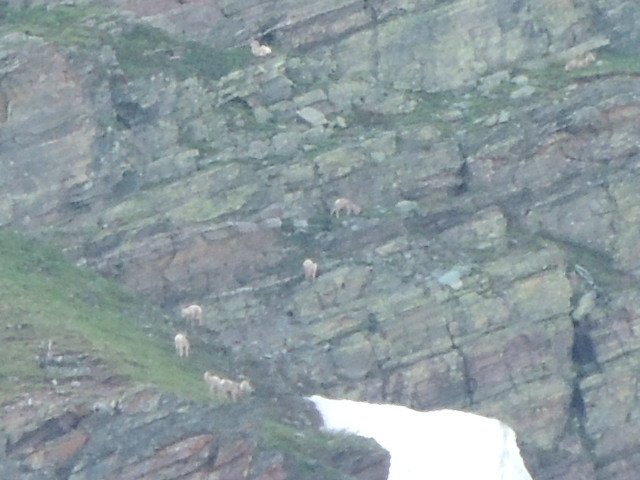 It rained that evening, but the next morning we woke to clearing blue skies,

and my husband’s breakfast special: fried potatoes and eggs with plenty of green chilis: 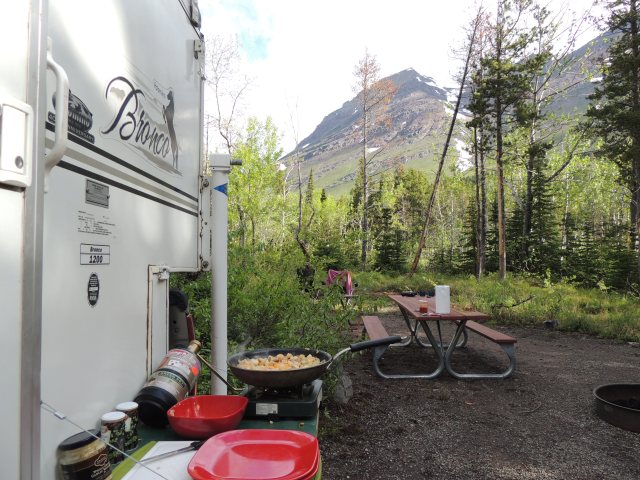 We planned to hike to Grinnell Lake, but first Bill had to challenge me to a bear spray shootout.

He’s such a Montana boy.  Wisely, I didn’t let him draw on me.

The hike is gorgeous, of course.  Later in the year you can go all the way to Grinnell Glacier, but now the route is blocked by snow. 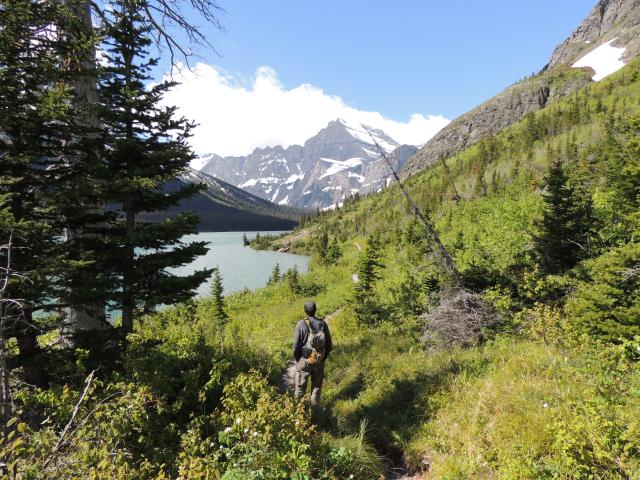 Along the way we ran into a handsome spruce grouse and we spooked an elk with a tiny new fawn: 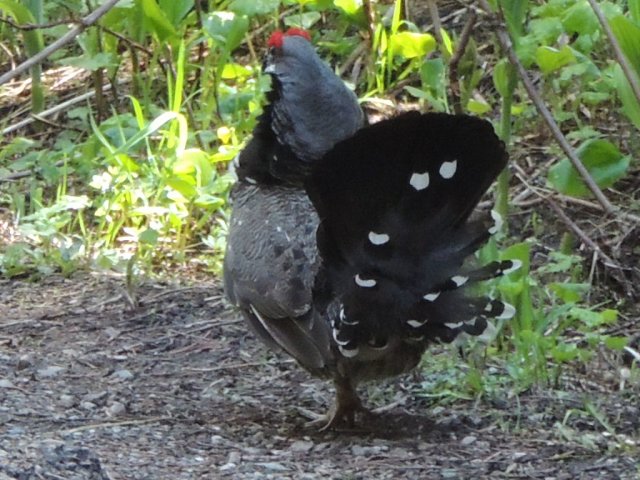 No bears, but there was some very fresh scat in the middle of the trail that definitely got my attention!

Does a bear poop in the woods? No! On the trail!

After our hike we decided to try out the Cut Bank Campground on Saturday night.  It’s a small campground at the end of a 5 mile gravel road, so we hoped it would be even more empty than Many Glacier.  And it was – there was only one other camper there.  He was an interesting guy, too: he was getting ready to man the Scalplock Lookout for the summer, a job he’s had for thirteen years.  Not a bad life.

On the way to Cut Bank we pulled off the road to eat lunch, and discovered that Yogi had already claimed the spot!   He seemed to like watching us as much as we liked watching him. 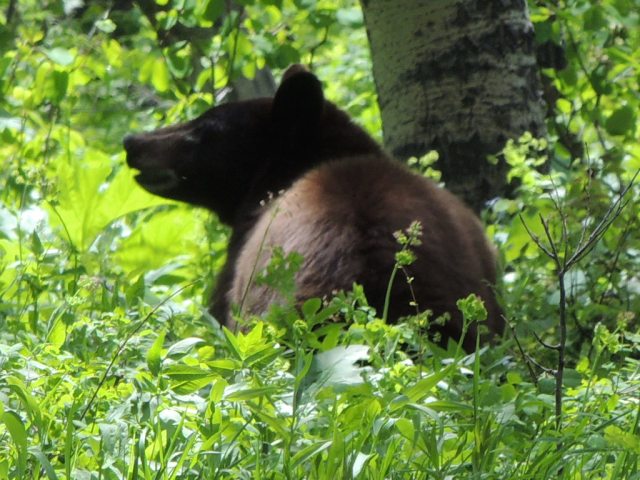 Cut Bank is the trailhead for the hike to Triple Divide Pass: a divide where the waters flow in three directions: to the Pacific, the Gulf of Mexico, and Hudson Bay.  We hiked just a short way up the trail, but it’s definitely worth a return visit.

The views from the campground aren’t too shabby, either.

I’ve had my morning coffee in a lot of incredible spots, but this has got to be one of the top ten. 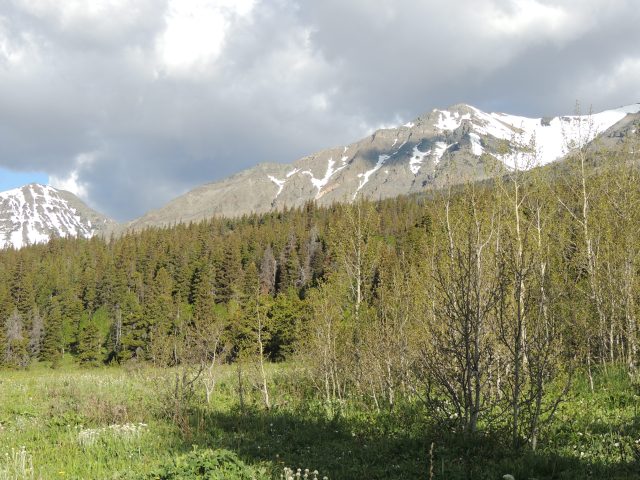 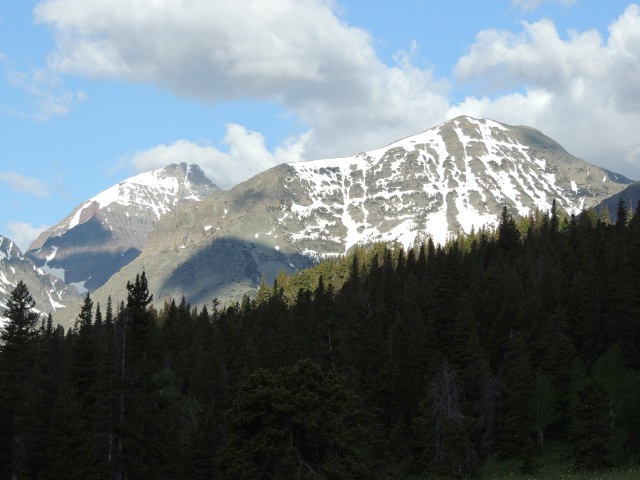 The flowers are just starting to bloom.  In a couple of weeks the lupines and sticky geraniums will add even more color to these meadows.

I’ll leave you with a final peek from one of the many ever-curious ground squirrels.  This guy was a little too brave, so let’s hope he’s still around!

10 Responses to Does This Bear Spray Make Me Look Fat? Accessorizing for Glacier.