A Tale of Two Eagle Nests

Back in January I wrote a post about watching the bald eagles at two different nests beginning the process of fixing up their nests for the spring.    The first couple – which I called the Hauser eagles because the nest was near Hauser Dam on the Missouri – was very busy working on renovating a nest that they hadn’t used for a couple of years.   Couple two – the Craig eagles, since their nest was located near the town of Craig – was a bit more laid back about renovations, since they had just used their nest the year before.

I looked forward to spending the spring months playing amateur naturalist: systematically watching the photographing the nests, and keeping notes on each visit.     My own little tribute to Aldo Leopold and Rachel Carson.

And that’s what I’ve been doing.  I began watching the eagles in the cold and snow of March, and have been watching regularly since then.  Yesterday I visited the Craig eagles, and late last week I checked on the Hauser couple.    It’s much more pleasant now.

On March 7 the Hauser eagles were already sitting on the nest.    It seemed early for them to already be incubating, but that’s what seemed to be happening.  Usually one eagle stayed on the nest, but sometimes they hung out there together.  Typically one eagle was on the nest when I arrived, and the second would show up within an hour to trade places.

The Craig eagles were much slower to sit on the nest; in early March there was no one around, but by the end of March the incubation had started.

It wasn’t exactly  rough duty watching these guys, either.  The setting of each of these nests is pretty gorgeous: 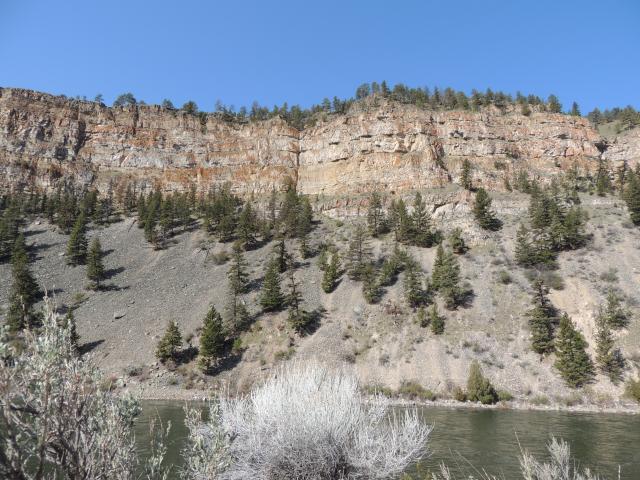 The Hauser nest is in a fir tree halfway up the slope.

The Craig nest is in the old Ponderosa pine on the right.

The weeks passed and I kept watching.  It wasn’t boring, either: I was seeing the eagles catching fish, calling to each other when the partner was too slow to take his or her turn on the nest, and attacking magpies who got too close to the nest.

When I arrived at the Hauser nest on April 21, things looked different.  The eagle was in the nest, but it seemed to be sitting higher than before.  Eventually the second eagle returned, and they both were focused on something in the nest: an eaglet!    I could just see his little head poking up over the side of the nest.     Too small for a photo, but he was there.  When I next returned to the nest – about 10 days later – the eaglet was big enough to see clearly:

Things at the Craig nest took longer.  It wasn’t until early May that I saw an eaglet: 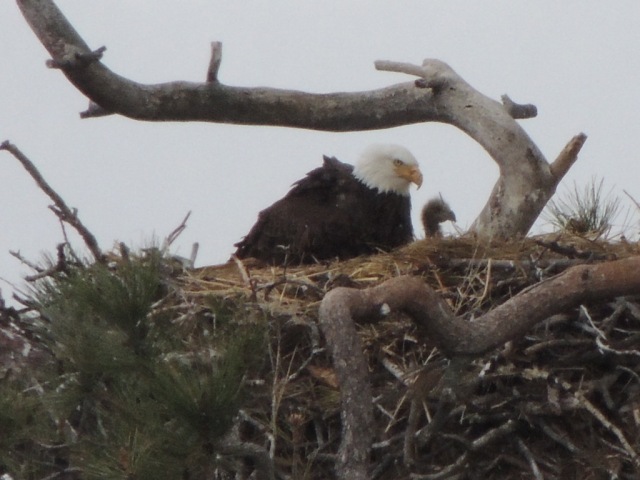 and it took until last week before I knew for sure that there were three young ones in the Craig nest.

The lone Hauser eaglet is quickly getting bigger, but it will still be some weeks until it flies.

Meanwhile, one parent or the other keeps an eye on things.

Three eaglets at one nest and one at the other: success!

Hello. I'm Cindy, and I love to hike, bike and explore the outdoors - particularly the western U.S.
View all posts by westerner54 →
This entry was posted in Birding, Montana, Nature, Outdoors, Wildlife and tagged Bald eagle nests, eagles in spring, eaglets, playing naturalist. Bookmark the permalink.

14 Responses to A Tale of Two Eagle Nests