Ever thought about what it would be like to be on top of a mountain in a lookout tower in a thunderstorm?

Our first visit to McCart Lookout, near Sula, Montana, was in late June, which is thunderstorm season in Montana.  It’s a pretty easy 1 1/2 mile hike from the car to the lookout, so it’s a great trip to bring all the heavy goodies that you normally wouldn’t want to lug on a backpack:  wine, brie, fresh fruit, your nice pillow.   (And of course, if you have a sherpa-husband like I do, you can really go wild!)     When we started out in the afternoon it was a lovely summer day, with not a cloud in sight.  We arrived at the lookout in late afternoon,  and spent a little time settling in.   The lookout has been renovated so that it looks the way it would have looked when it was used in the 30’s, and it’s delightful. 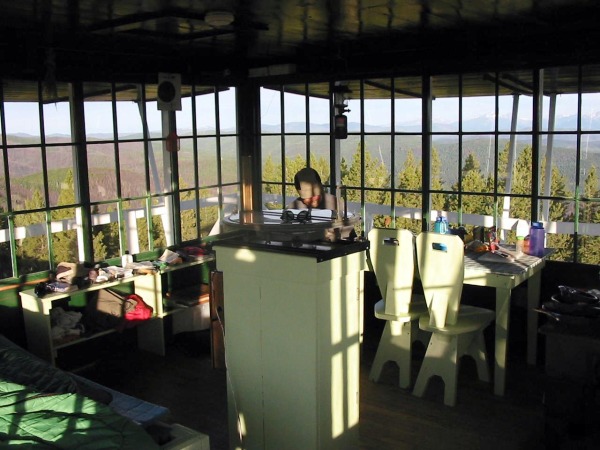 By evening huge thunderclouds were building, and I interrupted my reading of the lookout journal and switched to the directions for what we were supposed to do in a lightning storm.   The advice to NOT TOUCH METAL  and SIT IN THE MIDDLE OF THE BED while NOT TOUCHING ANY METAL was not particularly reassuring, but Bill assured me that the lookout was nicely grounded with a lightning rod, so we’d be fine.   And, indeed, we were.  As the night progressed we were surrounded by thunder and lightning, but none of the storms actually passed directly over us.     The wind howled all night, the lookout shook, and the lightning was spectacular, but nothing too frightening.    I just wish we’d managed to get some pictures of some of that stupendous lightning.  Anyone out there in blog-land have good stories about lightning storms in a lookout?  I’d love to hear them.  Or, tales from other lookouts, as well!

Medicine Point lookout is across the valley from McCart, and is a more difficult hike in.   It’s only about a 3 mile hike, but I think it gains a few thousand feet over those three miles, which is fairly steep.  And, although there is a spring near Medicine Point, it’s not too easy to find, and not especially reliable.  (In case you want to go, we took a picture of the directions to the spring, which I’ve posted below.)  But, because the lookout is higher than McCart, the views are just amazing, and the sunsets can be beyond belief.  Here are some photos of both McCart and Medicine Point lookouts, as well as the gorgeous views from Medicine Point: