Into Grizzly Country: Half Moon Park in the Scapegoat Wilderness

I’m afraid of grizzly bears.  Especially at night.   In a tent.  In the wilderness.

And, as I’ve mentioned earlier, this fear has kept me from backpacking in Yellowstone or Glacier National Parks.     It’s frustrating, though — Montana is full of gorgeous hiking destinations, and lots of those destinations are both in grizzly country and farther than I can go in a day.

Half Moon Park in the Scapegoat Wilderness is one of those places.     The Scapegoat is one of my husband’s favorite places, and my fear of bears meant that I’d only been able to explore around the edges.    So, a couple of years ago I made a decision that I really am quite proud of.   I agreed to go on a 4 day backpack with my husband and two other friends to Half Moon Park.    My only condition was that we had to bring enough bourbon so that I could have a shot to help me sleep each night.

The route to Half Moon Park from the Crown Pass trailhead usually takes two days of hiking, following Green Fork Creek.    But husband Bill and friend Jim had discovered a “shortcut” to Half Moon so that we could get there in one day.  One long day.     “Shortcut” has since become code for “a pretty darn stupid plan that only men would call ‘short’.” 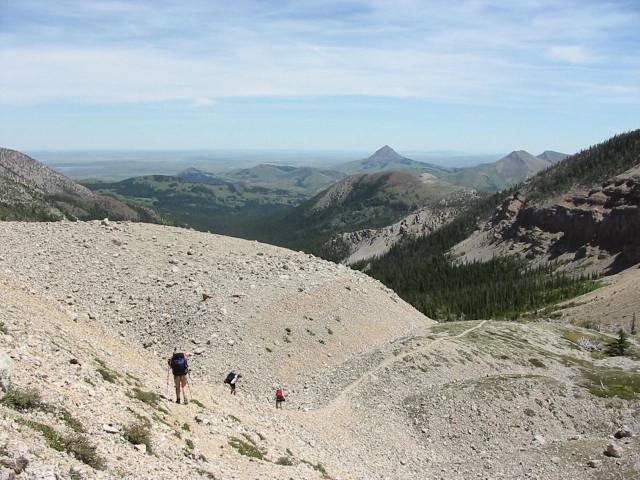 It didn’t escape me that bears would also like to follow game trails…but there were four of us, and we made plenty of noise, so we didn’t surprise any animals at all.    Naturally, we got a bit lost along the “shortcut”, which added more up and down.   After about 10 miles we came out in the long valley that leads to Half Moon Park.     I was getting pretty tired, and wasn’t paying close enough attention to where I was putting my feet, and I ended up tripping in a  gopher hole and giving my ankle a painful twist.     Luckily I could still walk on it, so I hobbled the last couple of miles to Half Moon Park.    Usually I am nicely revived by the reward of getting to a beautiful spot, but on this night, I was simply wiped out.   Bears were still in the back of my mind, but the front of my mind was pretty fully occupied with exhaustion and pain from my ankle.    So I was in luck!

We set up camp, ate dinner, and stored our food out of the reach of bears: 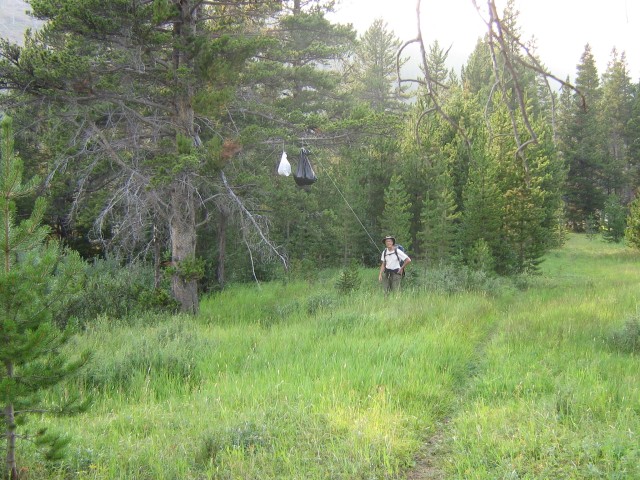 I didn’t even wake up in the night when a deer was sniffing around our tent.    In the morning I could appreciate what a lovely spot it was: 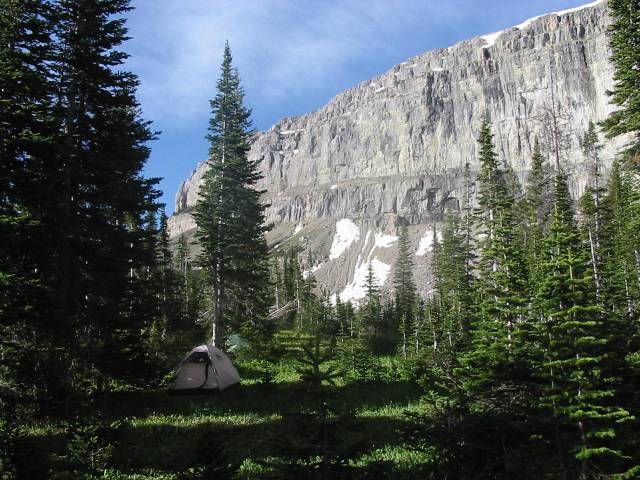 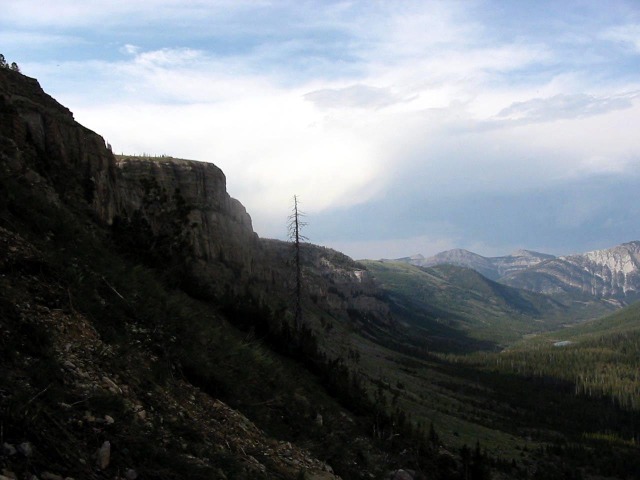 Looking down into Half Moon Park

The next day we planned to climb Scapegoat Mountain, and once my ankle was tightly tied in my boot I actually felt pretty good.  We headed off along a creek that lead to a ridge.  Along the creek we saw plenty of bear scat, and tracks, but no actual bear. 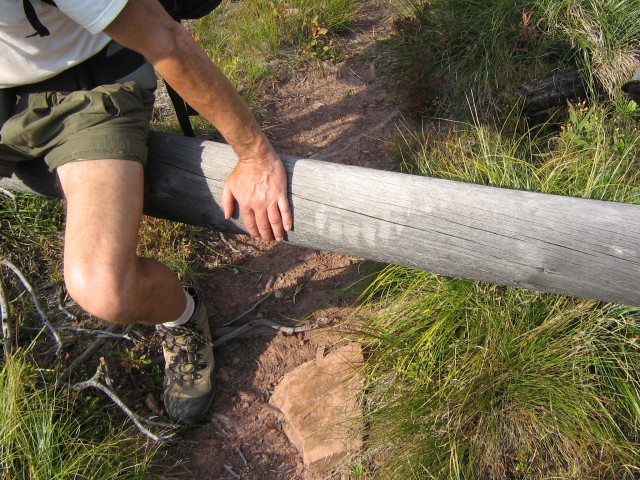 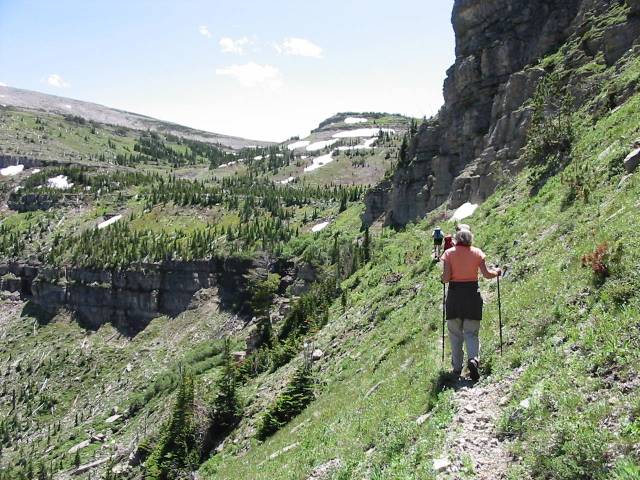 Since I was "wounded", I got to be pack-free!

I didn’t make it to the top of Scapegoat, though.  My ankle was not feeling too great when we got to a plateau partway up.  So Bill and I had a nice lunch break while our friends went to the top.   And I wasn’t even too worried about bears up here…there really wasn’t any reason for them to be up here, and we would have been able to see them from a ways off anyway. 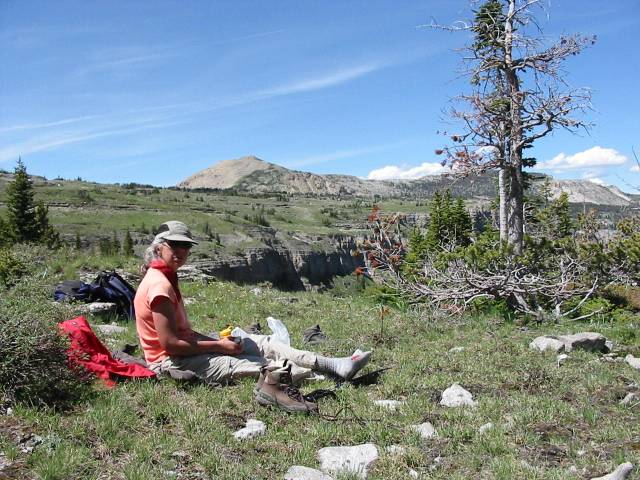 Not a bad lunch spot. I think I was still kind of worried about bears, though...

We camped a second night at Half Moon Park, and the third day we headed down the Green Fork to our third campsite.   This hike was just 5 or 6 miles, and fairly level, so it wasn’t too taxing.    Our campsite the last night was not as idyllic as the one at Half Moon, and I was pretty alarmed when I walked down the trail a bit and came upon a very fresh, very large, pile of bear scat.  Clearly the bears liked this trail too. 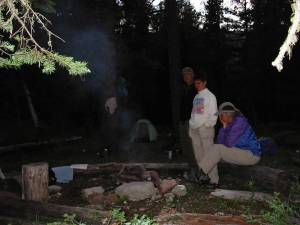 I'm worrying about how many bears will be stopping by during the night.

Bill and I had put up our tent pretty close to the trail,  but after I found the bear poop I made us move it behind some fallen logs, so at least I’d be able to hear the bears as they tried to get into our tent!

I had my bourbon that night, and do believe I slept an hour or two, anyway.  Didn’t actually hear anything even remotely scary.

We hiked out the fourth day, and ended with a lovely dip in the creek at the trailhead.    No bears sighted, but as we were getting ready to leave we noticed a hummingbird nest with two baby hummingbirds in it!    Truly magical. 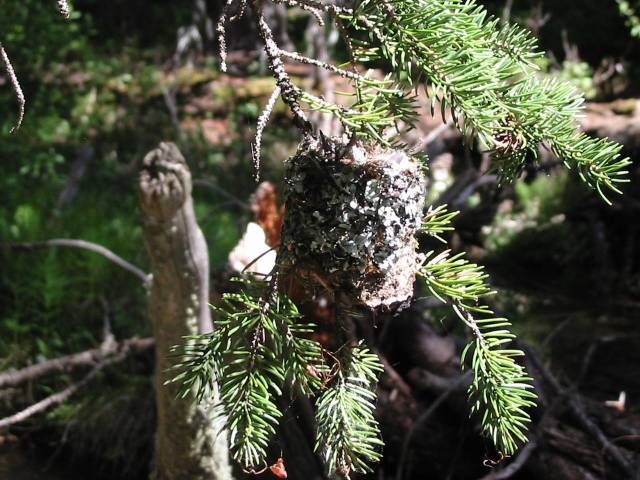 Can you see the babies?

26 Responses to Into Grizzly Country: Half Moon Park in the Scapegoat Wilderness