From Xi’an to Fez

Hauling a 5 year old to the middle of China for 4 months can have its drawbacks, I supppose.   But looking back on it these many years later, I can’t remember what they are.   And now that the 5 year old is a wonderful, curious and adventurous 27 year old, she’s providing us with grand excuses for trips to exotic locales.

We taught English in Xi’an, China for the fall semester of 1990.     As a result of the student protests and the tragedy of  the massacre in Tiananmen Square in 1989, foreigners were few and far between in Xi’an in 1990.      In our very large university,  there were a total of three English teachers.  There were no other families.

But our intrepid child fit right in.   My students adored her, and she attracted crowds whenever we did anything: 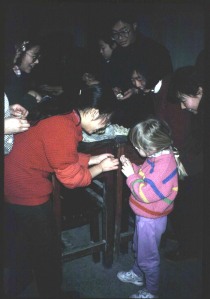 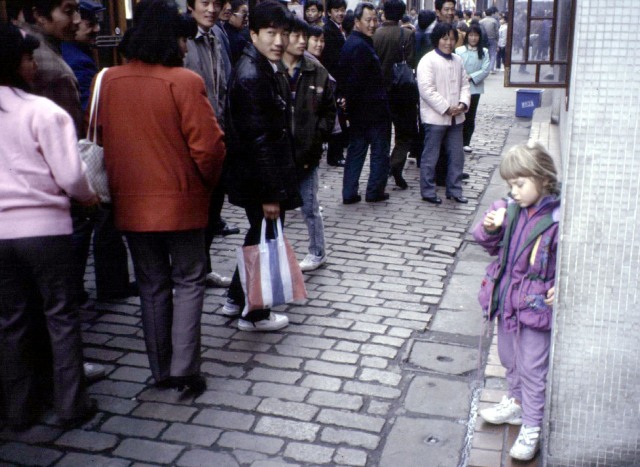 Look at that girl! She's eating! Will she like it??

This constant attention had its traumatic moments, but the experience did instill in her a love of travel, and a most wonderful curiosity about the rest of the world.    When she started college she was determined to learn Arabic, which has meant that we have had the benefit of visiting her in both Tunisia, and, just last spring, Fez, Morocco.

Lillie had been living in the Fez Medina for seven months when we visited last April.    The medina is winding labyrinth of tiny streets, lined by ancient houses, hidden souks, mosques, medersas and cafes.  It’s a large walled city with no motor vehicles (because of the narrow, narrow, streets) but thousands of mules and donkeys.      Finding your way through the medina is a huge challenge, and it was a number of days before we were brave enough to start exploring on our own.    And even with her good directions, we were lost within 10 minutes.     But what a wonderful place to get lost in.  The sounds, the smells, the medieval scenes around every corner…it is stunning. 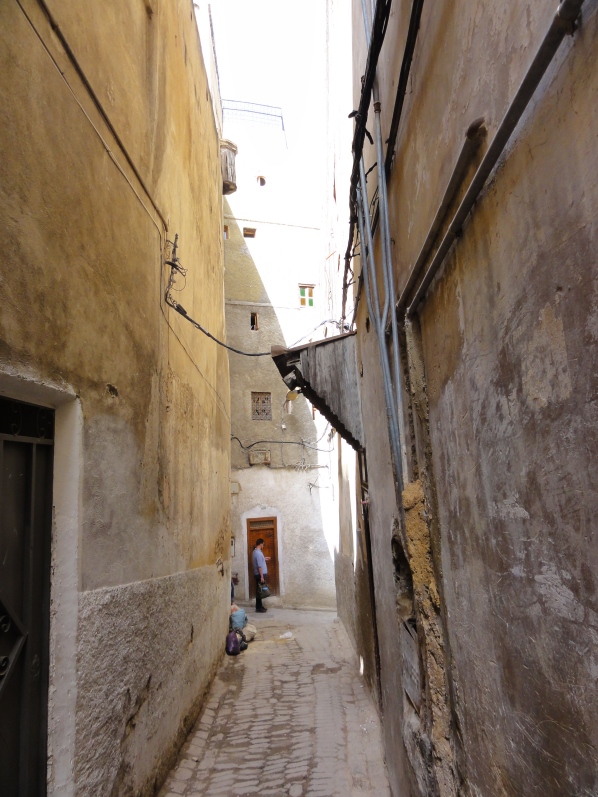 My daughter's house is at the end of this "street" 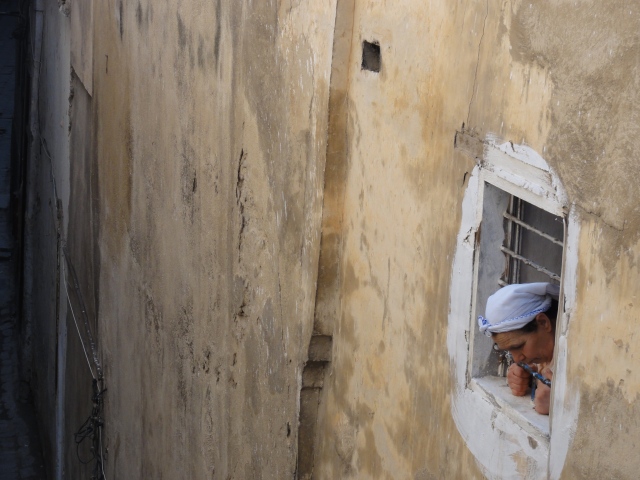 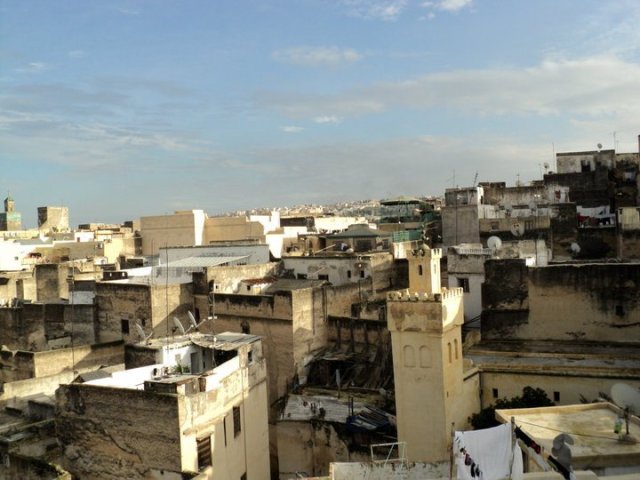 View of the medina from the roof of the house. Lots of living takes place on the rooftop terraces. 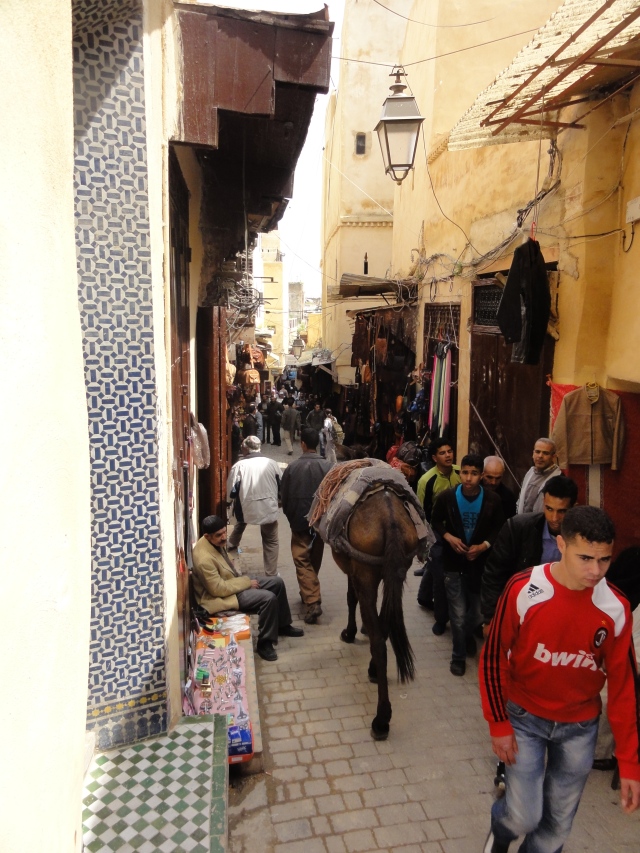 Talaa Kebira, one of the main streets in the medina 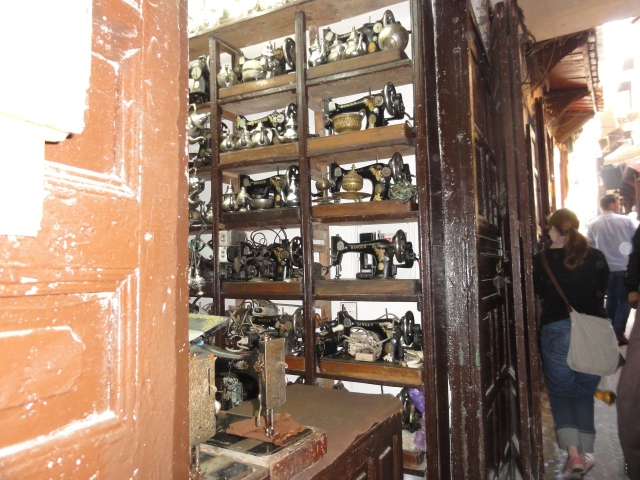 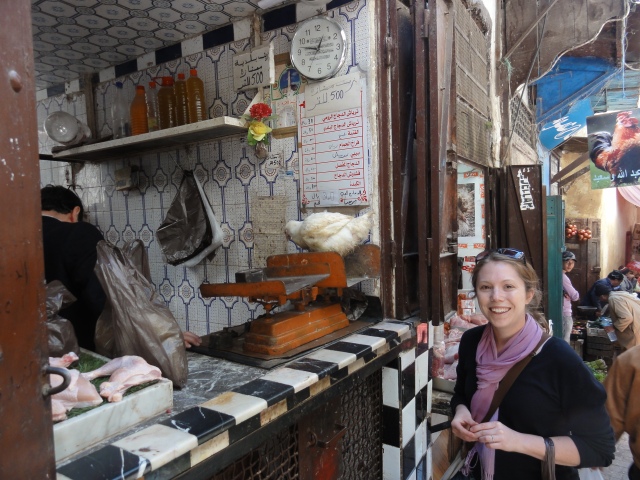 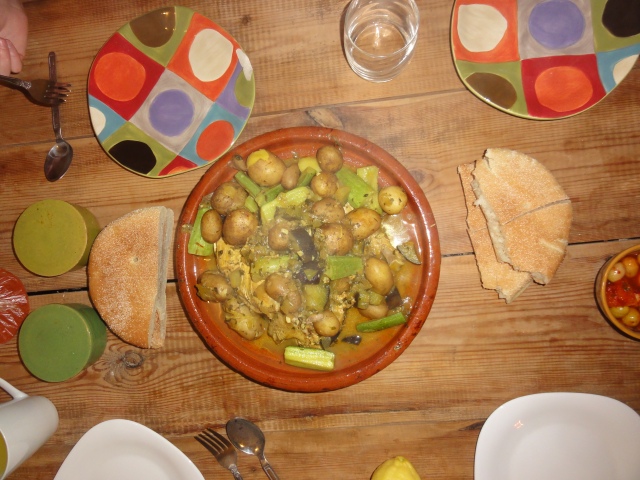 And the chicken later that night!

And the sounds as well as the sights of the medina:

Hello. I'm Cindy, and I love to hike, bike and explore the outdoors - particularly the western U.S.
View all posts by westerner54 →
This entry was posted in Adventure, Africa, Morocco, Photography, Travel and tagged China, family, Fez, Morocco, travel, Xi'an. Bookmark the permalink.

7 Responses to From Xi’an to Fez