I’m not a scientist.

But – after three days in the wilderness with the Wilderness Institute – I am an official Citizen Scientist.  And I’ve got the badge to prove it.*

*Not really.  Didn’t get no stinkin’ badge.

Even without the badge it was a great three days, backpacking with my wonderful daughter, a good friend, two leaders and 3 other nice folks over Pintler Pass and across the Wilderness.

We arrived at the Moose Lake Trailhead on Friday around 11:00 after spotting a badger on the road in, which was totally cool.    After the necessary futzing around at the trailhead – and dividing up the group gear, which made my already too heavy pack even more too heavy – we were ready to go.

Our job in general was to help the Forest Service monitor the ecological and social aspects of this particular wilderness:  basically they want to be able to give people an idea of what kind of “wilderness experience” they can expect when travelling through the Pintlers.   So we were checking trail conditions,  noting invasive plants, how many people we saw and how much noise we heard, and the condition of the campsites we used or passed.     They also have a goal of educating folks on the value of wild lands, and the importance of not leaving a trace when you travel through.    All important stuff, and fun too.

Here are a couple of Citizen Scientists at work:

And a real scientist at work.  (Sara, one of our leaders.  She gets to use the technical stuff.) 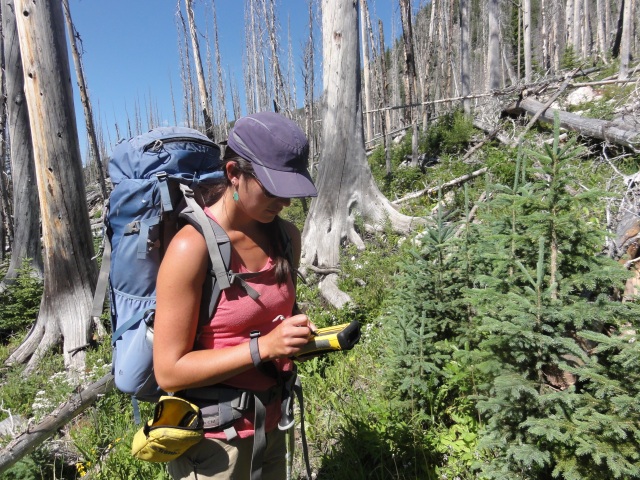 Our first night’s camp was at Johnson Lake, about 4 1/2 miles from the trailhead. 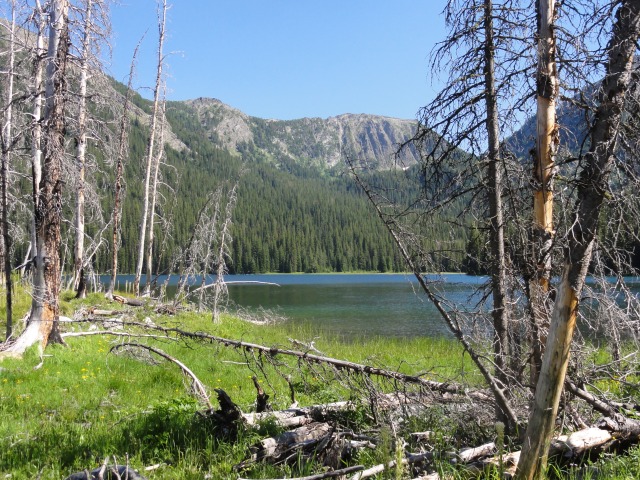 The area around the lake is pretty heavily used, but even though we saw two parties of people on the way in we were the only campers I was aware of. 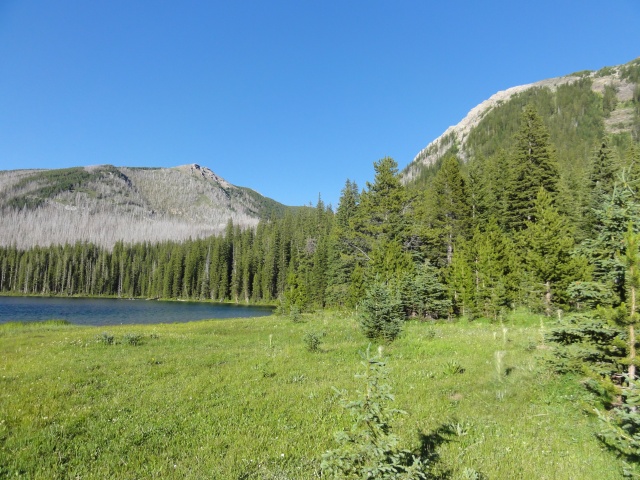 We made a tasty group dinner of quinoa and vegetables and pesto:

and relaxed for a while with cookies and trivia games. (Note to self: no matter how vociferously you insist that Lincoln’s son name was Tod and not Tad, you still won’t be right.)

Hanging the food bags was an entertaining group activity, and leader Evan even showed us how to tie a bow hitch:

I know – it looks like he’s meditating, but this is actually a demonstration!

On Saturday we headed up and over Pintler Pass, then down the other side, along Pintler Creek for a bit and then up and over another ridge before we camped for the night.

The meadow below Pintler Pass is particularly scenic, although the mosquitoes were a bit troublesome. 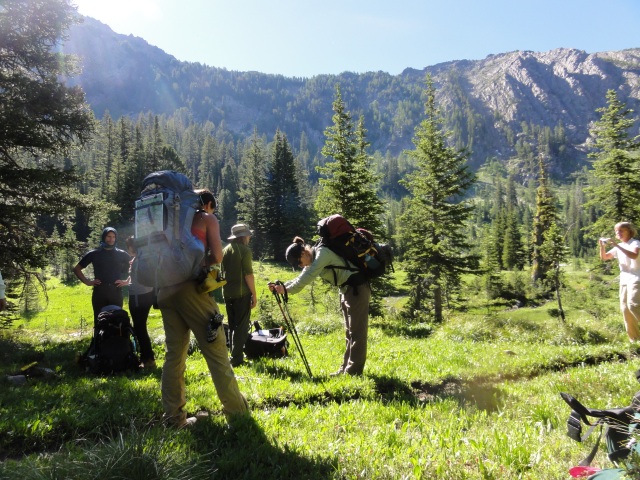 Resting before heading up the pass.

On the way down the other side: 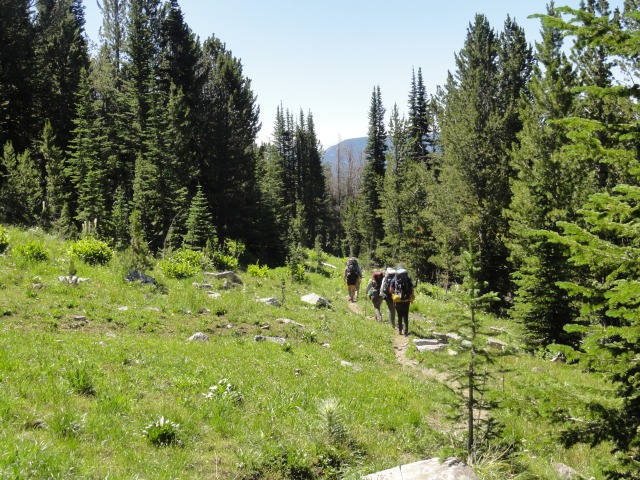 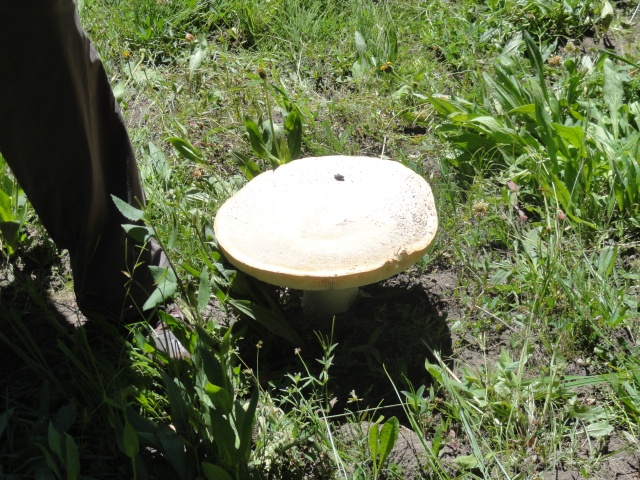 A giant mushroom along the way.

We camped in a pretty little meadow above Mudd Creek.  Our goal was to follow the Mudd Creek trail down to a vehicle that another Wilderness Institute group had left.  (They were hiking the other way, and would end up at our vehicle at Moose Lake.  We actually met that group on top of Pintler Pass.)    The trail is not heavily used, and we actually did not see where it went from our camp on Saturday night.  On Sunday morning we fanned out and hunted for it and found it.

Saturday’s dinner was another delicious meal: vegetable curry over rice, with coconut/green curry sauce.    The mosquitoes were a bit more pesky at this site, but not too bad. 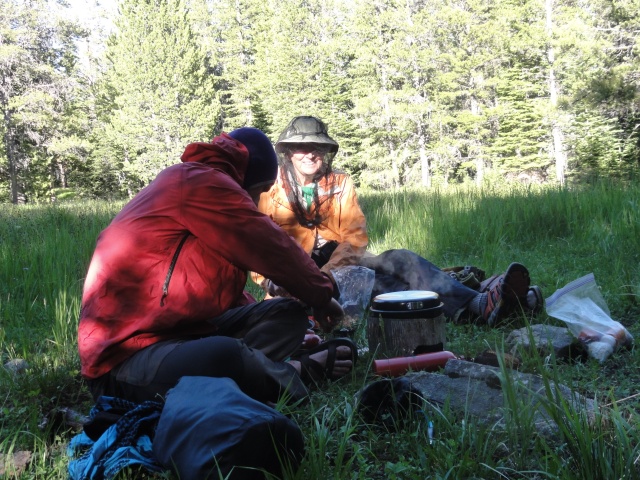 Making dinner. I want a mosquito net like this one – doesn’t it look elegant?

Sunday’s hike out was all downhill, for which I was extremely grateful.  There were a few spots with downed trees that we needed to clamber over, but luckily we had Evan with us to manhandle them out of the way!

Cold soda spritzers and cheese and crackers were waiting for us when we reached the car: a nice reward after a hot hike!

Seven of the Citizen Scientists on the last morning: 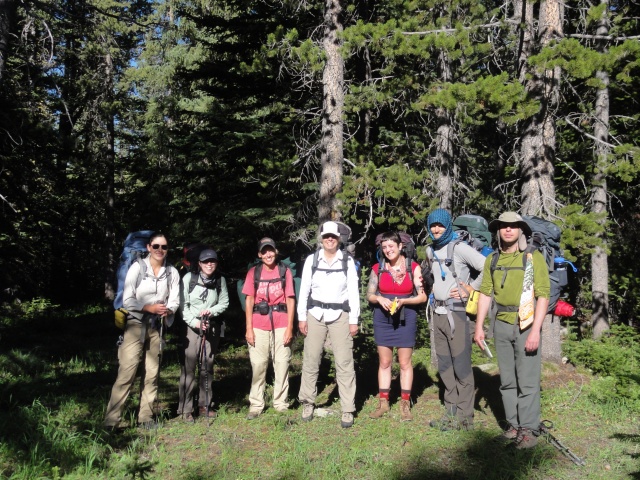 17 Responses to Citizen Scientist-ing in the Anaconda Pintler Wilderness